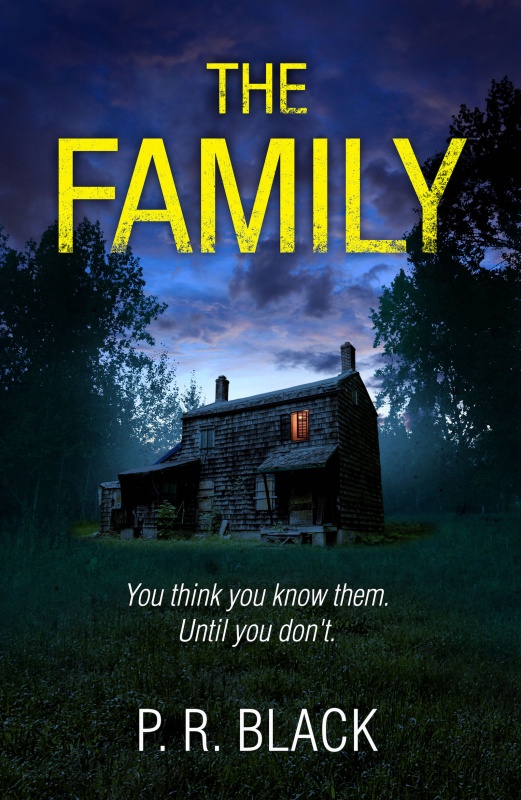 It’s the weekend, the sun is shining (mostly,) and P.R. Black is here with the blog tour to his latest novel, The Family.

The best way to catch a killer? Offer yourself as bait.

Becky Morgan’s family were the victims of the ‘crimes of the decade’.

The lone survivor of a ritualistic killing, Becky’s been forever haunted by the memories of that night.

Twenty years later, with the killer never found, Becky is ready to hunt them down and exact revenge. But the path to find the murderer is a slippery slope and she finds herself opening up some old wounds that should have been left sealed.

Will Becky avenge her family or join them?

I’ve reviewed The Family below but first, P.R. Black and Aria have shared an extract.

‘Let’s turn to the perpetrator – who is it we’re looking for?’

‘I’m afraid that clues are few and far between, which is why it’s taken so long to find him. He never showed his face, but what we can say is that the man we’re looking for was around six feet tall or more, well-built, and probably aged between 25 and 40 – certainly a young, fit man. That means he’d be between 45 and 60 today, of course. He had a strong accent – not English, and, we think, not French, but perhaps Eastern European.’

The presenter faced the camera. ‘I apologise to viewers in advance, as this is a particularly distressing detail. But we have to talk about the mask.’

‘Yes,’ said Inspector Hanlon. ‘As far as we can tell, it was this mask.’

‘We should stress, this is an artist’s interpretation,’ the presenter added.

‘Yes. This object seems to have been created by the killer himself. We believe it’s made of real bone, attached to some dark cloth. It’s nothing that was available in fancy dress shops, but it is just possible that someone, somewhere, might remember a man buying this mask from a specialist shop.’

‘It’s difficult to imagine what that poor girl must have gone through.’

Becky toasted the TV screen. ‘Don’t have nightmares,’ she said, remembering the final words uttered by the presenter who hosted an earlier series of Crimewatch.

On-screen, the presenter said, ‘Inspector, what more can you tell us about what the killer was wearing?’

‘When he arrived at the cottage, he wore all-black clothing. The only other clue we have is that he had size-fourteen feet, going by footprints left at the scene. He was wearing these shoes…’

The man beside Becky said, ‘I bet he wasn’t wearing all-black clothing when he got going. He might have kept his shoes on, though, for a quick getaway.’

She glanced at him for a moment – and then he was wearing her G&T.

Rivulets meandered down his jowls like tears, and a sliver of lemon clung to his chin like a slug on a bannister losing its fight with gravity.

‘What do you think you’re doing?’ he spluttered.

‘I was just going. Love.’ Becky lurched to her feet, clinging to the counter until her shoes found purchase, and then strode out the door.

The bar was set in the basement of a refurbished tenement block, and Becky had got halfway up the stairs to street level when the man who’d sat beside her gripped her shoulder. She gasped and clung onto the railings to avoid falling backwards.

The man’s hair was still plastered to his forehead with her gin. He looked like a young boy grotesquely groomed by his mother for church.

‘I dunno who you think you are, freak,’ he snarled, ‘but you’re lucky I don’t kick you up and down this street.’

Becky jerked her shoulder clear of his grasp and hurried up the rest of the stairs. The man followed. On the even ground, she spun to face him. He did not stop.

‘Touch you? I wouldn’t dream of touching you. Miserable cow.’ Still, he came forward, teeth gritted. Something glinted in his hand. When she realised that it was his own half-finished G&T, primed and ready to throw, fear gave way to rage. Becky lunged.

The heel of her hand smacked into the centre of his face with a flat, ugly crunch. His glass of G&T tinkled back down the stairs as he gaped in stupefaction, blood gushing from his nose.

Becky gripped him by his dog-eared lapels, spun on her heels and hurled him against the railings.

The man clattered into the ironwork then pitched backwards, flat-out on the pavement. After a second or two he sat up, blinking, blood glossing his lower jaw and drenching his shirtfront. The railings were still reverberating.

Across the street, someone shouted, ‘Hey!’

Becky turned, and began to run. 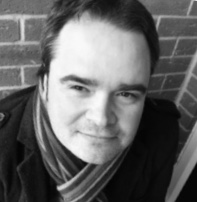 Author and journalist PR Black lives in Yorkshire, although he was born and brought up in Glasgow. When he’s not driving his wife and two children to distraction with all the typing, he enjoys hillwalking, fresh air and the natural world, and can often be found asking the way to the nearest pub in the Lake District.

His short stories have been published in several books including the Daily Telegraph’s Ghost Stories and the Northern Crime One anthology. His Glasgow detective, Inspector Lomond, is appearing in Ellery Queen’s Mystery Magazine. He took the runner-up spot in the 2014 Bloody Scotland crime-writing competition with “Ghostie Men”.

His work has also been performed on stage in London by Liars’ League. He has also been shortlisted for the Red Cross International Prize, the William Hazlitt essay prize and the Bridport Prize.

Click to view The Family on Amazon, Kobo, Google Play and iBooks. 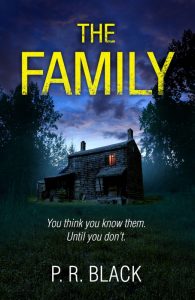 My review for The Family:

Although it took me a couple of chapters to settle into it, it wasn’t long before I was completely obsessed. There is a lot to set up at the beginning – information that is needed for the other end of the book. Plot elements are sown and I had to keep reading. I needed to find out what happened.

You can tell immediately that Becky is a strong female character. She would have to be to survive what happened prior to the beginning of the novel.
I immediately had empathy for her.
Like with most of this genre of novel, I pretty much suspected everyone else.

I know I say this a lot but there really isn’t anything I can say about the plot without giving anything away and I don’t want to do that. It’s a book I want people to read for themselves… all the gasp/flipping heck moments, the twist and turns (of which there are many) and shocking scenes right up until the end.

This novel is the darkest psychological thriller I have ever read. There are creepy and scary moments as well as gory ones (warning.) It’s also frightening how easy it is to hide with technology if you have the knowledge but also how exposed it makes most of us.

The Family is dark, tense, addictive read that holds copious amounts of suspense, and quite honestly, scared the hell out of me. I am not scared to admit it. P.R Black is not afraid to push in terms of plot. Bravo to him. Can’t wait to see what you do next.