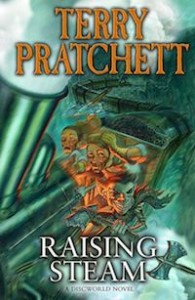 I have long been a great fan of the writings of Terry Pratchett, not just his Discworld works but everything he has done.

His latest offering, Rising Steam rose to the occasion and is a thumping good read. Steam is coming to Ankh-Morpork, much to the dismay of the Patrician, and this wonderful new invention will change the lives of everyone it touches.

The book follows the opening days of the steam engine, from one man’s shed in a small village, to a race against politics across the plains and into Uberwald.

I thoroughly enjoyed this book and read it in just over a day. It was un-putdownable. It is wonderful to see the evolution of Discworld continuing and I really like the ‘cameo’ appearances from many of the characters whom I have come to love from other books in the series.

The only downside is that this book might not make much sense to anyone who hasn’t read any of the Discworld novels already; for if you haven’t been reading them for years then getting into the series can be hard. That said, it is worth reading some of the others just so that you can read this one.

I can thoroughly recommend this book to anyone who is a fan of Pratchett and his Discworld or anyone with a passion for steam and a head for fantasy. There is a certain magic about steam and maybe that’s why it fits so well into the Disk.

To the consternation of the patrician, Lord Vetinari, a new invention has arrived in Ankh-Morpork – a great clanging monster of a machine that harnesses the power of all of the elements: earth, air, fire and water. This being Ankh-Morpork, it’s soon drawing astonished crowds, some of whom caught the zeitgeist early and arrive armed with notepads and very sensible rainwear.
Moist von Lipwig is not a man who enjoys hard work – as master of the Post Office, the Mint and the Royal Bank his input is, of course, vital . . . but largely dependent on words, which are fortunately not very heavy and don’t always need greasing. However, he does enjoy being alive, which makes a new job offer from Vetinari hard to refuse . Steam is rising over Discworld, driven by Mister Simnel, the man wi’ t’flat cap and sliding rule who has an interesting arrangement with the sine and cosine. Moist will have to grapple with gallons of grease, goblins, a fat controller with a history of throwing employees down the stairs and some very angry dwarfs if he’s going to stop it all going off the rails