The Engagements by J. Courtney Sullivan 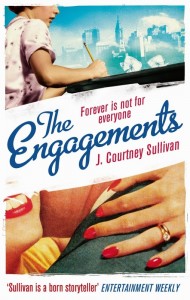 An interesting look at relationships and the attitude toward that diamond ring.

1947: Mary Frances Gerety, a young copywriter in an eminent advertising agency, has to convince the world of two things – that marriage means a diamond ring on every woman’s finger, and that she is as good at her job as any man. And then, in one moment of brilliant inspiration, Mary Frances writes down four words which will achieve both her aims . . .Moving from a Harvard swim-meet in 1927 to the three-martini lunches of 1940s advertising, from the back streets of 1980s Boston to an exquisite Parisian music shop in 2003, The Engagements is a novel about love, marriage, commitment and betrayal; it is as sharp, as fiery and as beautiful as the stone we have taken to represent our dreams.

The Engagements focuses on five different decades and five apparently unconnected people who are all at varying stages of their relationships. One is single but married to her job, another is happily married but has a problematic son, the third is happily married but struggling for money, the fourth is in a contented marriage but longs for excitement and the fifth is very happily unmarried. The first person, Mary Frances Gerety, has just come up with the famous ‘A Diamond is Forever,’ slogan. Her story had a very Mad Men feeling and I loved it. It then cuts to Evelyn who has been married to Gerald for years but her son, Teddy is about to ruin his marriage. James is married to Sheila but they don’t have a lot of money and so he feels as though he’s not providing for his wife and children. Delphine has married her best friend but clings onto excitement when it comes knocking at her door and Kate is with Dan but not married and she doesn’t understand why people enter into such a thing.
This book definitely builds. There are a lot of characters to introduce and so much of the start of the book is establishing their individual stories. All the people seem unconnected and it isn’t until the end that you realise that there is a connection after all. Once all the characters were introduced,  it didn’t take me long to get enthralled in their stories. There is a little history thrown in as well which is always a good thing with me. Each story had its own point of view on engagement and marriage and had their own unique conclusions. There were some heart wrenching moments where I felt empathy with the characters. There were some stories I enjoyed more than others but overall, this was an interesting and enjoyable read.

(Published by Virago, January 2014. Available to buy in paperback and ebook.)