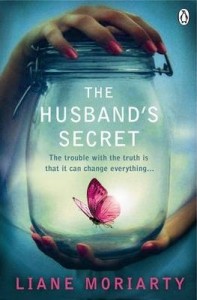 The Husband’s Secret by Liane Moriarty.

The Husband’s Secret firstly focuses on Cecelia who seems to have it all – a wonderful husband and perfect children. However, when she finds a sealed envelope addressed to her, in her husband’s handwriting saying ‘To my wife. To be opened in the event of my death,’ hidden among his things, she battles with the choice to open it.

It then turns to Tess who has just found out that her husband has fallen in love with someone else. Trying to escape the betrayal she feels, she takes her son and retreats back to her mother’s house in Sydney.

Finally, we have Rachel whose daughter was murdered many years before. Her main focus is now on her small grandson whose parents now want to take him out of the country.

These three women are soon bound together by this letter. The first part of the book sets up the characters and looks at their lives before Cecelia opens the letter. The second half is dealing with the aftermath once the letter is opened. I have to admit, when the book first began to focus on these three women, I wasn’t sure where the story was going to go. I love a good mystery though and once I’d got my head around who everyone was, I was hooked to the story and couldn’t put the book down.

It poses a very interesting question. If you found a letter addressed to you but with instructions not to open it, would you? I’m not sure I’d be able to resist.

Rachel’s and Tess’ stories are heart-breaking and although she was my least favourite character, I felt sorry for Cecelia when having to make a difficult choice – the truth or protecting her family and her life. It’s hard to know what anyone of us would do in that situation. The revelation in the letter I didn’t see coming straight away and I actually liked the fact that the secret was only revealed half way through. It established the characters well and the plot was well thought out – not giving too much away too soon.

I was intrigued as to how it was all going to be resolved at the end. I enjoyed this book and recommend it as a good holiday book.