British writing will be celebrated later today when the winners of the Jerwood Fiction Uncovered Prize will be announced in London at the Jerwood Space.

Fifteen books in total have been long listed (this is the first year the list has been released prior to the winners being announced.) The prize, established in 2010 is now in its fifth year. The prize is unique and it aims to showcase great British fiction.

Later today, eight winners will each be awarded £5,000. WH Smith Travel will be running an eight-week summer promotion featuring all eight winning Jerwood Fiction Uncovered Prize titles. Titles will feature in stores across the UK from 25 June 2015.

The fifteen books in contention for the prize money are: 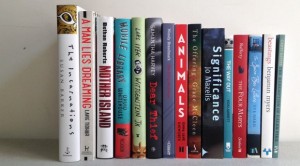 When announcing the list, chair of judges India Knight said:

“It is absolutely thrilling to have found such brilliant books, across such a wide variety of genres, and from authors that live and write all over the country. These are fantastic writers who deserve to be household names.”

The Jerwood Fiction Uncovered Prize is a Literary Platform project and is open to British writers who have had more than one work of fiction published.

Find out more at http://www.fictionuncovered.co.uk

We wish the fifteen authors on the list the best of luck.