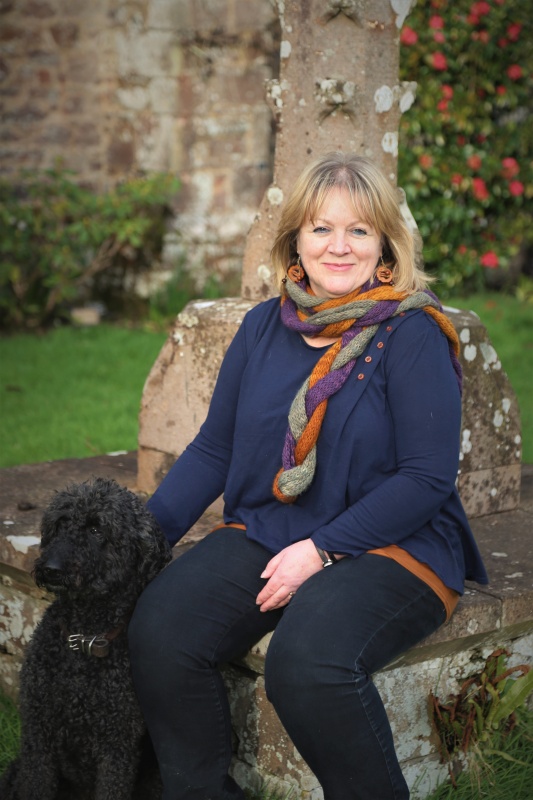 Hi Kate, thank you so much for joining me today. Can you tell me about your book, Beneath Cornish Skies and what inspired it?

Hello, Laura, and thank you for inviting me to be on your blog.

Cornwall has always inspired me.  As a teenager, I holidayed on the North Cornish coast in a thatched cottage with impressive, uninterrupted views over a wooded valley down to the cliffs and the sea beyond. It made a huge impression and it’s this cottage that features in my fourth novel with Aria.

I like to write books that have a message; hopefully, readers will think Beneath Cornish Skies delivers.  It’s not simply a contemporary romance, but also a story about a young woman’s journey in finding herself, with a little help from friends, nature, ancient magic and spirits in the landscape. 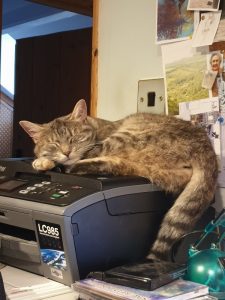 I like to be at my desk by 9am, working through to lunch when I meet up with my husband (who also has a home office).  In the afternoon I catch up on any writerly loose ends, social media posts, etc., or if I have a WIP I concentrate on that.  Our kitten-cat regularly visits and, having been turfed off the keyboard on numerous occasions, she settles on the printer and watches out for any pieces of paper to attack!

How do you approach the process from first draft to final edit and how has this changed since writing your first novel?

I’d like to be a plotter, but as my characters develop I’m often put in the pantser camp!  I think I may be a plantser – a little of both.

Hopefully, the first draft is an unhindered stream of imagination.  I’ve worked as a proof-reader, copy-editor and writer, so, at the final edit I put on my objective ‘editorial’ hat and heavily prune, removing any superfluous words and anything that hinders the story’s momentum.

Since writing my first novel there have been no major changes to the process, apart from having a keener idea about deadlines and pacing myself.  I don’t panic so much and approach each ‘challenge’ a word at a time.

What, in your opinion, is the most common mistake made by aspiring authors?

Many people believe writing a novel is easy.  You put pen to paper, or fingers to keyboard, and a publisher will soon snap you up and success will follow… but that couldn’t be further from the truth!  To write, you have to master self-discipline, even when the words refuse to flow.  It’s a hard way to make a living, but if you’re drawn to writing you cannot deny it.  At the start of my writing journey, a more experienced author gave me this advice: ‘Have patience.  Each novel is your apprenticeship.’

Do you feel character or plot is more important? Why?

I believe character and plot are interdependent.  Really strong, engaging characters can diminish if the plot is pants; on the other hand, if you create an amazing plot but the characters don’t match up to it, the whole story can fall flat.

If you could tell your younger writing self one thing, what would it be?

To believe in herself and not worry so much!  Life has a way of working out and what is meant for her will manifest.

What songs would be on a playlist for Beneath Cornish Skies

I usually have a playlist when writing a book, but with Beneath Cornish Skies there wasn’t one!  In my head was the music of the sea and surf along the North Cornish coast, with the wind whispering through the treetops and birdsong in the woods spilling out across the landscape.  However, I did have goose bumps whilst writing, as Luke Evans’ beautiful singing voice played on a loop via YouTube, including songs such as Show Me Heaven and The First Time Ever I Saw Your Face.

Imagination.  If you possess that you are never bored or alone.

Other than your novels, what’s your favourite novel you’ve read and why?

There are so many talented authors, it’s impossible to choose just one novel.  However, a story that has stayed with me since first reading it is The Giver of Stars by Jo Jo Moyes, about a group of extraordinary young women delivering books on horseback to the remote Kentucky mountain community in the years leading up to WW II.  I believe a film is in development.

Do you have any other advice for aspiring writers?

Just do it!  If you write romance, join the Romantic Novelists’ Association.  Their New Writers’ Scheme is enormously helpful in honing your craft and making your story publication-ready.  Finally, be kind to yourself, enjoy the journey and don’t worry about rejections; it’s all part of the process. 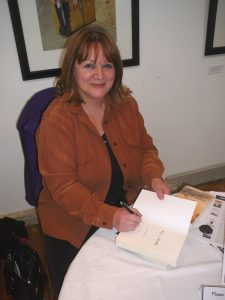 Kate Ryder is an award-winning, Amazon Kindle international best seller who writes timeslip and romantic suspense in a true-to-life narrative. On leaving school she studied drama but soon discovered her preference for writing plays rather than performing them! Since then, she has worked in the publishing, tour operating and property industries, and has travelled widely.

Kate is a member of the Romantic Novelists’ Association and the Society of Authors.  In 2017, she signed a 4-book contract with Aria (digital imprint of award-winning independent publisher, Head of Zeus).

Summer in a Cornish Cove, a contemporary romantic suspense set on the Lizard Peninsula, gained her a nomination for the RNA’s 2018 Joan Hessayon award, while its standalone sequel, Cottage on a Cornish Cliff, reached the heady heights of #2 in Kindle Literary Sagas.

‘Secrets of the Mist’, a mysterious timeslip romance, not only achieved #1 Kindle best seller flags in the UK, Canada and Australia, but also reached #49 in Amazon UK Paid Kindle. In the original, self-published version (The Forgotten Promise) it was awarded the first Chill with a Book “Book of the Month”.

Originally hailing from the South East of England, today Kate lives on the Cornish side of the beautiful Tamar Valley with her husband and a collection of animals.

About Beneath Cornish Skies 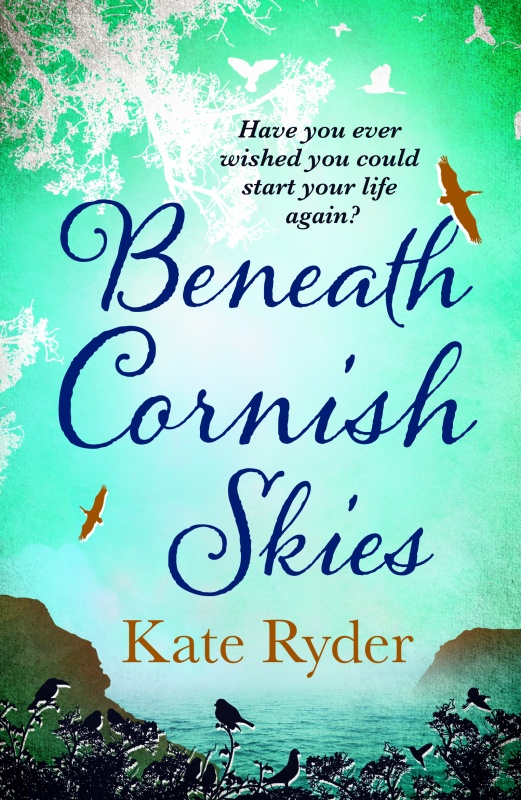 To an outsider, Cassandra Shaw’s life looks perfect. She lives in a beautiful, luxurious house in the English countryside, with a handsome, wealthy boyfriend who insists she needn’t do a day’s work in her life. But Cassie knows that something is not right. Her boyfriend has grown colder, treating her more like a housekeeper than a future wife. And her time feels empty and purposeless.

Cassandra has always been riddled with insecurities and self-doubt, but, just for once, she decides to take a chance on a new beginning. She answers an advert for a live-in nanny, dog walker, cook and all-round ‘Superhuman’ for a family living in a rambling manor house on the rugged North Cornish coast. The work is hard and tiring, but Cassie has never felt so fulfilled.

As Cassie learns to connect with the natural beauty unfolding around her, Cornwall starts to offer up its secrets. Soon, Cassie starts wondering if she was drawn to this isolated part of the coast for a reason. Why was she guided to Foxcombe Manor? What are the flashes of light she sees in the valley? Is it her imagination or does someone brush past her? And who is the mysterious man living deep in the woods?

A beautiful romance with a hint of ghostliness, Beneath Cornish Skies is for anyone who has ever longed to start their lives again.

Beneath Cornish Skies was released via Aria on 7th January 2021. Click to view on Amazon UK.