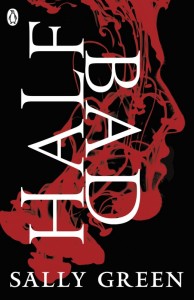 Nathan is between good and evil. He is a half code: he’s half white witch and half black and therefore is on the edge of conflicting worlds – not really belonging anywhere. This is a fact that the council, his half-sister and the purest white witches don’t want to let him forget.

He is a prisoner of the council, being put through assessment after assessment, wondering whether each time is going to be the moment he’s given freedom as a white witch or whether he will be condemned and will face a darker future, if one at all.

His father is the most notorious black witch and the more he learns about his dark ancestry, the more he has to try and live down a reputation in the real world as he approaches his seventieth birthday and the traditional giving ceremony. He also wonders about his father. He wants to search for him and meet him.

This book is the first part in the series focusing on Nathan as a child and his struggles as a teenager. He is trying to find his identity when he feels as though he doesn’t fit in anywhere and is being constantly told that he’s not good enough.

I empathised with Nathan. I think he only wants acceptance and a chance to find out who he is and the freedom to do so. He has many people around him telling him what he needs to do and what he can’t do and I loved how his character develops over the course of the story – he developed into a stronger character. As chaos grew around him, he adapted and began to discover what he was capable of.

He does struggle between two sides of himself and I’m intrigued to see how he does and what direction he will take in the later books.

Sally Green sets the scene and atmosphere well and it was easy to imagine the surroundings. The pace and tone of the narrative (it’s told from Nathan’s point of view,) added to the conflict and danger which gradually grew as the chapters went on. It did slip into second person POV for a chapter which I did find strange (simply as it’s a rare thing for me.)

The end had some great cliffhangers. In my opinion, a great start to what promises to be a fantastic book series that will appeal to both adult and YA.

Half Bad by Sally Green is published by Penguin £7.99 paperback

Sally’s blog tour for Half Bad stops off at Jessheartsbooks tomorrow so be sure to check that out along with the other stops on the tour. Details are displayed on the tour banner.