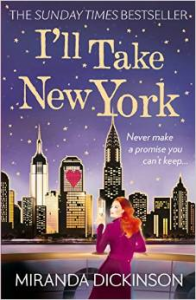 I love the fact that it’s set in New York . It was where I went for my honeymoon and so there were a few scenes that did make me smile as they brought back memories. I want to go back now.

The writing style is effortless and I quickly got into the story. I didn’t want to put it down. I wanted to keep reading. This is the first of Miranda’s novels I’ve read but it’s nice that a few characters from Miranda’s previous novels make a return to the page In this case, Rosie, Ed and Celia from Fairytale of New York (amongst others,) appear in this book (Jake is Ed’s younger brother.) I like it when that happens – when I get a chance to return to characters I’ve loved reading about. Reading I’ll Take New York has made me want to go and read Fairytale of New York as I also loved Rosie and Ed. You don’t need to have read previous novels to be able to know what’s going on with this one though. It stands alone.

I am certainly fast becoming a fan of Miranda’s novels and I loved this book. if you love romance and great, warm characters then I recommend it especially with the horrible cold weather. This book, a cup of hot chocolate and a warm blanket equals bliss.

I’ll Take New York was published by Avon on 4th December 2014. It’s available to buy in most bookshops. Click on the link to view on Amazon: www.amazon.co.uk.)