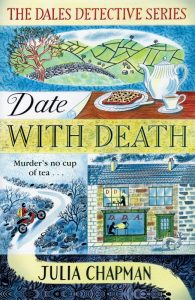 Huge hellos today to Julia Chapman and the blog tour for her new novel, Date with Death which is part of the Dales Detective Series, released by Pan on 9th March. Here’s a bit about it….

Murder’s no cup of tea.

Samson O’Brien has been dismissed from the police force, and returns to his hometown of Bruncliffe in the Yorkshire Dales to set up the Dales Detective Agency while he fights to clear his name. However, the people of Bruncliffe aren’t that welcoming to a man they see as trouble.

Delilah Metcalfe, meanwhile, is struggling to keep her business, the Dales Dating Agency, afloat – as well as trying to control her wayward Weimaraner dog, Tolpuddle. Then when Samson gets his first case, investigating the supposed suicide of a local man, things take an unexpected turn, and soon he discovers a trail of deaths that lead back to the door of Delilah’s agency.

With suspicion hanging over someone they both care for, the two feuding neighbours soon realize that they need to work together to solve the mystery of the dating deaths. But working together is easier said than done . . .

To celebrate the release of her new novel, Julia asks, what’s in a name. 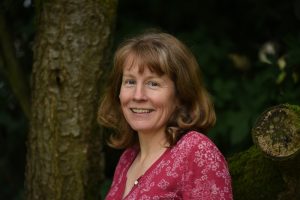 My novels are full of characters. But when you are creating a brand new person, where do you start? Usually, the physical characteristics come first for me. On the odd occasion, a character has emerged on the page complete with name from the very beginning. But that’s unusual.

On the whole, I create the people who populate my books from scratch. But sometimes the traits I give them come from real life. For example, I have a gorgeous Weimaraner called Tolpuddle in my new Dales Detective Series, a large grey dog who has a habit of leaning against people. I took that detail from a New Zealand Huntaway I once knew who was just like that. He would come up and lean into you, his weight heavy on your leg. But it wasn’t threatening. It was reassuring. As though he was letting you know he was there – in case you were in trouble.

I stole that characteristic and gave it to Tolpuddle. The rest of him is pure fiction. Especially his penchant for beer!

But perhaps the most essential part of any character, for me, is the name. It can tell you as much as any detailed physical description. More sometimes! We all know a Susie is different to a Susan. A Bill is going to be possibly less formal than a William. We can even deduce a person’s age simply from what they are called. Edith and Lucy – both live in Bruncliffe, the setting for the Dales Detective Series. Want to take a bet which one lives in Fellside Court retirement complex and which one runs the local cafe?

(Having said that, I do have a character called Titch who is massive. But then, if a bit of name inversion was good enough for Little John in Robin Hood then I’m happy to follow suit!)

How to choose this fundamental aspect of the people who will populate my books, then? By the time I reach the stage of assigning a label, the personality is usually fully formed. So I need the name to be right – it has to fit the person emerging from under my words like a glove. Consequently, it can take me a lot longer to christen my characters than to create them.

Take the landlord of the Fleece in Bruncliffe, the setting for the Dales Detective Series. He’s morose. A misanthropist.

He’s a reluctant host and suffers his customers only because they make him money.

He’s also tight. If you hand over a tenner, you’d best check your change. And don’t expect any free food on the bar. Or a drink on the house. 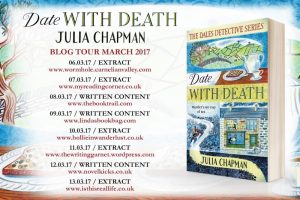 So where to start in naming him? With the local census. I want a Dales name, something that’s been in the area for a long time. But also something that resonates with this sullen man. Some authors use graveyards as a reliable source of local names. I turn to the census records from 1881 and spend a long time weighing up different names. I finally find it under ‘M’.

Mr Murgatroyd now needs a first name. I know his approximate age so I use the records of popular names from the decade he was born. I want something plain. Something solid. Even though it will never be used . . .

So there he is, fully formed. But there’s more. Because this man will never be known as Roger. Apart from by his wife, perhaps. To everyone else?

Well, behind his back he’s known as Fleecer. Partly as a nod to the establishment he owns and runs. Partly as a reflection of his habit of fleecing his friends when they come to drink in his pub.

But he’s a big man. Wide shoulders. Barrel chest. Quite a paunch on him too. He was also the local rugby team’s celebrated hooker back in the day. He’s not someone you want to annoy. So what would they call him to his face?

Troy. Troy Murgatroyd. The landlord of Bruncliffe’s smallest pub has been born. Here’s hoping he has a long and fulfilling life! 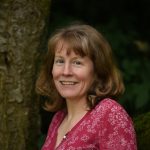 Julia Chapman is the author of Date with Death, the first novel in the Dales Detective Series, published March 9th (Pan). You can follow Julia on Twitter: @DalesWriter, visit her website www.jstagg.com and find her on Facebook: https://www.facebook.com/DalesDetective