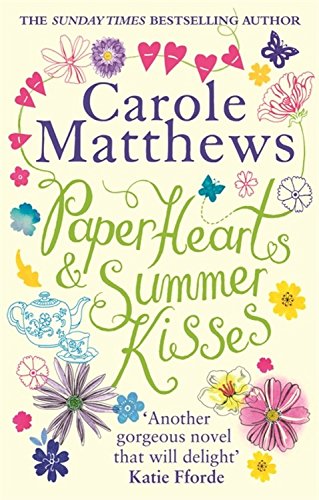 Knowing this story is based on a real-life person (Christie Chapman – look her up and also read her review on Amazon.co.uk) added a slice of intrigue to my reading. Don’t get me wrong, I don’t pretend to know any of Christie’s actual story, but if it was as heart-rending and inspiring as PH&SK portrays, then all hats should be doffed to the lady and her son.

Our main characters are Christie and her son Finn and it’s through Christie’s eyes that we see her struggle to support her son, whilst bringing him up as a single parent, not made any easier by the constant worry caused by Finn’s mysterious headaches, which never go away and keep him off school. Her parents are a wonderful source of support and when Christie finds herself jetting off to the USA for a crafting course by an up and coming US-based company, this is thanks to her mother.

Whilst there, she falls for the boss, a marvellously emphatic character by the name of Max who finds himself falling for Christie’s charms in return. However, the course of true love never runs smooth and after a close run thing, Christie finds herself back in England and things start to unravel. Her son’s illness reveals its’ true seriousness and Christie loses her job. There’s a beautifully written scene where her boss has to…no, I’m not going to give even a small plot point away that I don’t have to. Suffice to say it perfectly illustrates what can happen if you’re close friends with the boss.

Whether you’re new to Carole Matthew’s (if so, where have you been????) or a seasoned reader like myself, there’s nothing here not to enjoy. Treat yourself, it’s a no-brainer!

(Paper Hearts & Summer Kisses by Carole Matthews, Sphere, December 2016. Paperback due to be released in April 2017.)