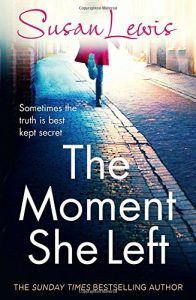 It’s Thursday again. Is it me or did that week go incredibly fast?! It does mean that it’s time for some more book releases…

The first book is The Moment She Left by Susan Lewis which has been released today in hardback. The e-book version is also available.

Kesterly-on-Sea is full of secrets.
Some are darker than others; many are shameful. One is even deadly.
Andee is an ex-detective whose marriage is breaking up. So when a young female student disappears without trace, she throws herself into the search.

Meanwhile, the town’s beloved Rowzee Cayne has just discovered that she is terminally ill, and doesn’t want to burden her family and friends with the news.
Andee and Rowzee don’t know it yet, but their journeys are going to help them uncover a secret. One that is going to affect them more than they could ever imagine.

This one sounds like I’d really enjoy it. It’s got a lot of mystery and sounds very compelling. I shall definitely be giving this one a read. 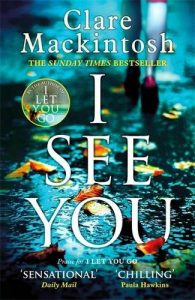 I See You by Claire MacKintosh has also been released today. I think this cover is so pretty. I have to admit, I’ve not read I Let You Go which was Claire’s debut novel but reading the synopsis for I See You, it’s one I will definitely pick up at some point. What do you think?

When Zoe Walker sees her photo in the classifieds section of a London newspaper, she is determined to find out why it’s there. There’s no explanation, no website: just a grainy image and a phone number. She takes it home to her family, who are convinced it’s just someone who looks like Zoe. But the next day the advert shows a photo of a different woman, and another the day after that.

Is it a mistake? A coincidence? Or is someone keeping track of every move they make . . .

Truly Madly Guilty is the latest novel from the fantastic Liane Moriarty. 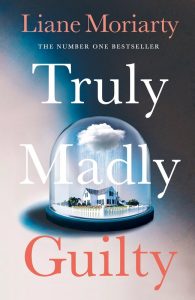 Despite their differences, Erika and Clementine have been best friends since they were children. So when Erika needs help, Clementine should be the obvious person to turn to. Or so you’d think.

For Clementine, as a mother of a two desperately trying to practise for the audition of a lifetime, the last thing she needs is Erika asking for something, again.

But the barbecue should be the perfect way to forget their problems for a while. Especially when their hosts, Vid and Tiffany, are only too happy to distract them.

Which is how it all spirals out of control…

It’s the week for suspense and thriller. There is something about Liane’s books that draw me in so I can’t wait to read this one. 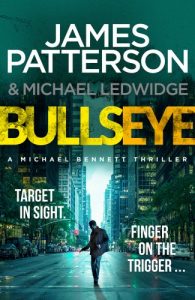 James Patterson and Michael Ledwidge have released Bullseye; their latest book in the Michael Bennett thriller series. I am not familiar with this series or the Alex Cross series but if you’re a fan of Reacher, then this sounds like it could be for you. It has its hardback and e-book release today.

As the most powerful men on earth gather in New York for a meeting of the UN, Detective Michael Bennett receives intelligence warning that there will be an assassination attempt on the US president. Even more shocking, the intelligence suggests that the Russian government could be behind the plot.

Tensions between America and Russia are the highest they’ve been since the Cold War, but this would be an escalation no one could have expected.

The details are shadowy, and Bennett finds false leads and unreliable sources at every turn. But he can’t afford to get this wrong. If the plotters succeed, the shockwaves will be felt across the globe. 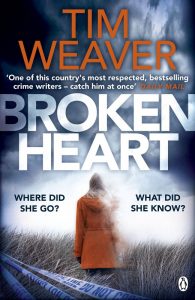 In a similar crime series theme, Broken Heart is the latest in the David Raker book series by Tim Weaver.

A woman drives to a secluded beauty spot on the Somerset coast.
CCTV watches her enter but doesn’t see her leaving.
In fact, Lynda Korin is never seen again.

How can someone just disappear?

Her sister calls missing persons investigator David Raker.
For him, the mystery of where she went is only the start. The real question is why a woman with no reason to run would choose to leave her entire life behind?

Was it her decision? Or did someone make it for her?

Raker is an expert at following the echoes of decades-old lies. But only Lynda Korin knows the most shocking secret of all – and she’s missing, presumed dead… 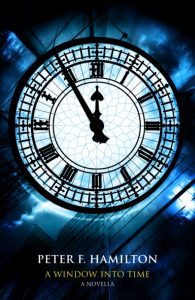 The final book I wanted to feature today is A Window into Time by Peter F. Hamilton. This novella has been released onto Kindle today.

Teenager Julian has perfect recall, which means he has trouble finding his place in the world. But he really does know his own mind. So when he starts experiencing someone else’s memories, which are also tantalizing glimpses of the future, Julian realizes he must find out why. And as he comes to know this unmet friend, it becomes clear that this man is in danger.

Julian resolves to do everything in his power to track him down – a journey which takes him to the heart of London’s commercial district, home to the city’s financial elite. He can’t give up, as he might just prevent a murder.

Which books are you liking this week?