His worst nightmare is back… 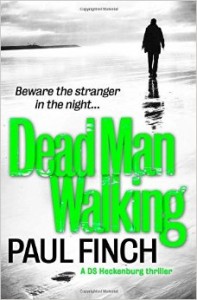 As a brutal winter takes hold of the Lake District, a prolific serial killer stalks the fells. ‘The Stranger’ has returned and for DS Mark ‘Heck’ Heckenburg, the signs are all too familiar. Last seen on Dartmoor ten years earlier, The Stranger murdered his victims in vicious, cold-blooded attacks – and when two young women go missing, Heck fears the worst. As The Stranger lays siege to a remote community, Heck watches helplessly as the killer plays his cruel game, picking off his victims one by one. And with no way to get word out of the valley, Heck must play ball…

When the review copy of this landed on my doormat and I read the blurb on the back I instantly decided that this would be the next book I would read. Although I have not read any of the other DS Heckenburg thrillers, I was not left in the dark as the book stands well on its own and the writer fills you in on any critical information from the other books in a very slick way that feels natural.

The story centres around a small village in the lake district and their two person police team including ex-big city police officer DS Mark ‘Heck’ Heckenburg who is looking for the quite life but ultimately fails to find it, as a serial killer starts picking off the villagers one by one. The characters are well-formed and I found them easy to visualise. Without wanting to sound too trite, I could not put it down; I just had to read one more page. By the time I was about half way through the book I had realised who the killer must be, but I had absolutely no idea why it was this person! This had the effect of making me feel smart (I had figured out who it was!) and frustrated (why is this person doing this?) which added to the book’s ability to draw me though it.

The plot was fairly straight forward and the cast of characters is not large, but it is very well written and highly engaging non the less. Let’s just say that I am going to be reading the rest of the DS Heckenburg thrillers very soon.

Dead Man Walking was released by Avon on 20th November 2014 and is available from most major bookshops or click here to view on Amazon.

To find out more about Paul Finch, you can visit his blog: http://paulfinch-writer.blogspot.co.uk