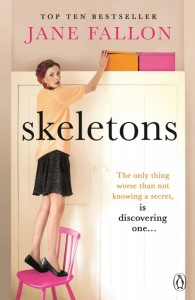 Jen has discovered a secret. It’s not hers to share, but is it hers to keep? If she tells her husband Jason, he might get over the shock but will he forgive her for telling the truth? She might drive a wedge through their marriage. If she tells someone else in Jason’s family – the family she’s come to love more than her own – she’d not only tear them apart but could also find herself on the outside: she’s never really been one of them, after all. But if she keeps this dirty little secret to herself, how long can she pretend nothing is wrong? How long can she live a lie?

Jen knows the truth – but is she ready for the consequences?

Jen leads a happy life. She is happily married to Jason, she has two daughters and she is very close to her husband’s family – her sister-in-law being her best friend.

Jen then learns a secret. It’s a secret that has the potential to ruin her perfect life and the perfect family around her. It’s not her secret but she’s in a horrible position. Either way, people are going to get hurt.

I am a huge fan of Jane Fallon’s novels ever since I had Getting Rid of Matthew recommended to me by a friend and I was looking forward to reading this new book from her. This book was a very interesting look at families and the dynamic of them. Families and personal relationships always intrigue me. You never know what lurks behind the façade of happiness and no one really can understand a relationship unless you are the people involved in it. This was a good insight into a seemingly functional family and how things are never as they seem.

To begin with, Jen was a little passive – happy to be a part of her husband’s family. However, once she learns the secret, you start to see another side of her character. She learns a huge secret and I don’t know how I would deal with it if I were in her situation and I felt empathy for her. She’s put into an impossible situation against her will really. I don’t want to give too much away about the secret, as it would ruin the story for anyone who wants to read it but even that isn’t what it seems on the surface.

At the same time, Jen starts to unravel secrets from her own childhood and the truth isn’t something she likes very much.

At the beginning of the book, I liked the secondary characters, her sister-in-law, Poppy, and her husband, Jason, but lost sympathy for them as the story went on especially with how Jen is treated. Regardless, I became very invested in these characters and really wanted to know their fate, which meant that I couldn’t put the book down.

This was a great book. I really enjoyed it.

Skeletons by Jane Fallon is published by Michael Joseph, £7.99

The next stop on the tour is tomorrow over on  http://scarsshelves.wordpress.com/